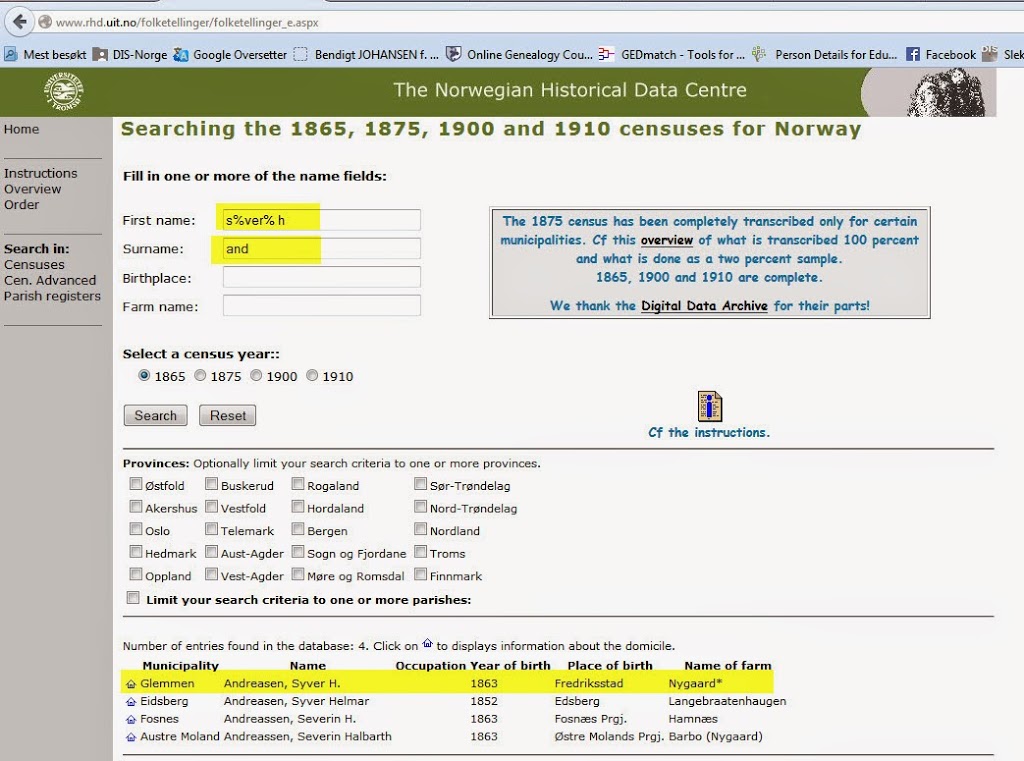 This question was put out on one of the Norwegian-American genealogy groups on Facebook.  The people in the group did the right thing, they tried to follow the family in the US before jumping across the pond. Since they did that, I decided to look at the Norwegian side of the Atlantic, as I did not find more information than the helpers in the FB-group.  I feel that when we help on Facebook, every bit of infomration is put out one by one posting, and it is hard to follow the research. That is why I put this in a blogpost here.

This was the only information given in the query:

Sivert Anderson b. 1865 in Norway. He married Swedish born, Julia (unknown maiden name) b. 1861. His children Annette (Nettie) and Sarah were born in Norway while Augustus, Paulina, and Agnes were born in Wisconsin.

The search for Syver and Julia
To start this research I went to http://www.rhd.uit.no to be able to do a wildcard-search like this in the 1865-census, because we did not know how Sever spelt his name in Norway. In one of the postings n the FB-group, it mentioned that Sivert had an “H” as a middle initial.  I found one very interesting person in the first search:
I looked into the first person in the list, and he had a sister named Antonette. That could be our man, as people often named their children after relatives. (Norwegian naming patterns should be studied to understand the basics, this link is very useful: http://www.nndata.no/home/jborgos/names.htm
Then I went to the Digital Archive, (free for all to use) and found Syver H. and his family there too, as that census gives more information from the originals: The links shows the families, I chose not to copy images in here:
Syver and his family in Nygaard, Glemmen , Østfold in the 1865 census:
http://digitalarkivet.arkivverket.no/en-gb/ft/person/pf01037998002893
Syver and his family lived in the neighboring town Sarpsborg, Østfold in the 1875 census:
http://digitalarkivet.arkivverket.no/en-gb/ft/person/pf01052005000683
Then when I went to the emigrant protocol to see if the Syver I had found, emigrated, I found this person, married and living in Fredrikstad. His wife did not go with him at this time:
Syver left in April 1887, here listed in the emigrant protocol from Oslo :
http://digitalarkivet.arkivverket.no/en-gb/gen/vis/8/pe00000001008917
Then I found that a married Julie left, with two daughters in July 1887:
Julie left in July 1887 from Oslo with the two girls listed in the emigrant protocol:
http://digitalarkivet.arkivverket.no/gen/vis/8/pe00000001014096
She was going to Porter Mills, so this made me sure I had the right family.
Antonette:
http://digitalarkivet.arkivverket.no/en-gb/gen/vis/8/pe00000001014097
Sigrid:
http://digitalarkivet.arkivverket.no/gen/vis/8/pe00000001014098
The family in the churchrecords:
Syver Hartvig and Julia got married April 27th 1884 in Glemmen in Østfold, Norway:
Kildeinformasjon:
Østfold fylke, Glemmen, Ministerialbok nr. 11 (1878-1917), Ekteviede 1884, side 589.
Permanent sidelenke:
http://www.arkivverket.no/URN:kb_read?idx_kildeid=3446&idx_id=3446&uid=ny&idx_side=-579
This gives Julias fathers name as Andreas Olson (she was a Andreasdotter), and confirms Syver Hartvig’s fathers name as Anders Andersen (Andreas and Anders are  the same name with several spellings.) Julia was born in Moo parish – that is in Sweden so everything fits.
Anette Marie – the oldest daughter was born before the parents got married. No. 44 here:
Kildeinformasjon:
Østfold fylke, Glemmen, Ministerialbok nr. 11 (1878-1917), Fødte og døpte 1884, side 127.
Permanent sidelenke:
http://www.arkivverket.no/URN:kb_read?idx_kildeid=3446&idx_id=3446&uid=ny&idx_side=-135
Date of birth March 26th 1884. Her given name in the emigrant protocol was spelled Antonette.
The youngest daughter, Sigrid Isidore (Sarah) No. 63 here:
Kildeinformasjon:
Østfold fylke, Glemmen, Ministerialbok nr. 11 (1878-1917), Fødte og døpte 1886, side 178.
Permanent sidelenke:
http://www.arkivverket.no/URN:kb_read?idx_kildeid=3446&idx_id=3446&uid=ny&idx_side=-187
Born April 13th 1886
Parents: Syver Hartvig Andersen and his wife Julie Andreasdatter
I have found Julia in Sweden also – but I wanted to put this out first.
Daughter – Sigrid died in WI in 1906: – here you have parents S. H. Anderson and Julia Anderson, I am sure  this is Sarah:
https://familysearch.org/pal:/MM9.1.1/XLFH-4QL